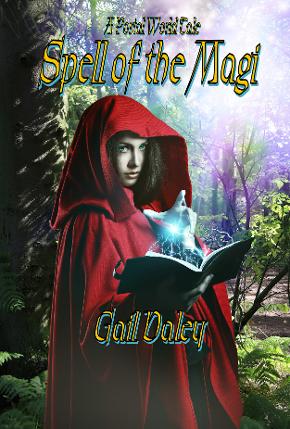 Nominated in the Sword & Sorcery Category in this year's EFFYs!

An Amnesiac Merc on the run falls for a sorceress hiding deadly secrets.

Rebecca was born to the Magi in a land where it means slavery or death. All her life she has hidden from the Shan's Witch Proctors who control the enchained Magi. To keep her family safe from them, she will risk anything, tell any lie even trick an innocent man into a forbidden marriage. She never expected to fall in love with him. But it happened. Now she and Andre must defy the Proctors with nothing but her untried magic and. his skill with a blade 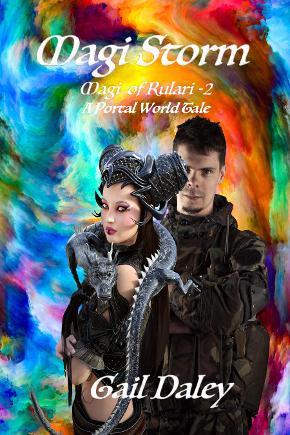 A simple act of kindness dumps a young healer into a web of Magic intrigue and war.

When Catrin arrives at the crumbling Wyvern Towers to unite Wild Magi Logan Silvermane aka the Weatherman, with his baby son, she discovers the place is in ruins. Logan is there on mission to convince an old friend to accept the new Magi Accords. The Accords will free Askela's enslaved Magi from the tyranny of the Proctors and help keep everyone safe from invasion from the nearby kingdom of Jacite. But there is a traitor at Wyvern Towers. Can Catrin & Logan convince a powerful wizard to return and take up the Magi defenses of Askela before a Jacite agent destroys them and Askela's best hope for peace? 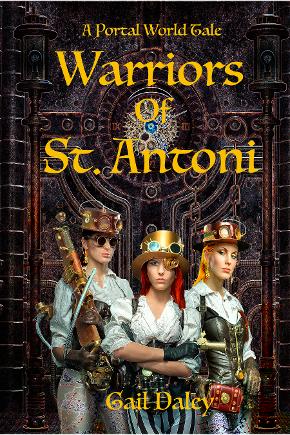 On the frontier world of St. Antoni, you got tough—or you died.

The Portal to the world of St. Antoni was unsanctioned. Immigrants who reached there were desperate to escape earth. They snuck through the Portal with only what they could carry and faced a new world without earths advanced technology. By sheer grit and determination St. Antonoians fought their way back to the steam age.

City states were controlled by powerful families, and the outlying ranches and mines were held by guns and guts.

This is the story of sisters Bethany, Jeanne and Iris and their struggle to survive and hang on to their ranch and mine after a sniper cripples their father. Bethany marries a mercenary gunfighter to shield her family from a predatory neighbor. To her surprise, the marriage of convenience turns into a love match, but Bethany and Alec must learn to trust as well as love each other. Iris chooses an arranged marriage with a beloved old friend, but did Carlos marry her for love, or to please her father? Jeanne and Samuel fall in love and run away to a distant city, but discover you can't escape who you are and Samuel is the son of her family's greatest enemy. Will their love be strong enough to survive when Samuel's father demands he return to the clan? 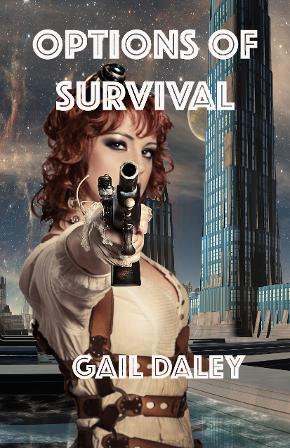 IN THE LAST interplanetary war a bio-weapon killed or sterilized all the males on Vensoog. To keep the colony alive, the Matchmaker Program found ex-soldiers like Zack a hard-as-nails ex-recon soldier and his five super-smart kids,without a planet and offered them a new home on Vensoog if they are willing to marry a Vensoog woman. With his home world now pile of radioactive ash, Zack desperately needs a new home for himself and his kids, so he accepts the offer.

When the Matchmaker Program pairs him with Katherine O'Teague, heir to Veiled Isle, computer hacker and one tough lady, they both wonder iif it is a match made in Heaven or Hell. They need to find out quick, because the ruthless Thieves Guild wants their kids and what they stole escaping from their clutches. And they will kill whoever gets in their way.

Plus, Katherine is falling for her new husband and hasn't a clue if he feels the same about her… 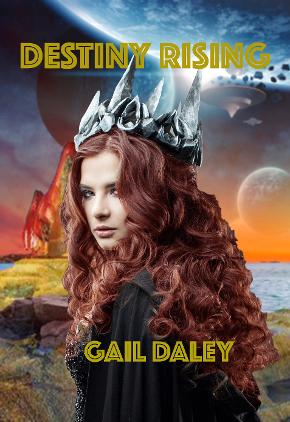 What happens to soldiers when the war ends? If their planet was a casualty, where do they go? A marriage of convenience between two determined, strong willed people sparks a planetary war and puts at risk everyone they love.

Laird Genevieve O'Teague, beautiful, and strong-willed became leader of her people at seventeen. Colonel Gideon Michaels had been a soldier who controlled thousands of fighters in the war. When it was over he needed a new home for his orphan niece and his adopted son. Genevieve’s offer would provide both, but could he follow his heart and learn to trust and love his new wife? Vensoog is under attack by space pirates and when Genevieve and his niece are kidnapped by an agent of the Thieves Guild, Genevieve and Gideon must learn to rely on each other and their newfound love to defeat their enemies. 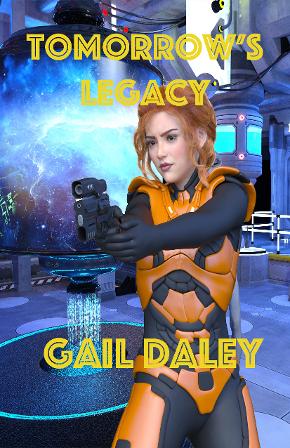 To save their planet from a hostile takeover, a warrior/priestess joins forces with a bard from another world and five genetically designed children.

Drusilla: A Dragon Talker, born of a line of powerful, psychically gifted women, she has been trained from birth to command the beasts of Vensoog.

Lucas: An off-world survivor of an interplanetary war, he is the untrained hereditary Bard of his people with the ability to compel with his voice.

Lucinda: genius level IQ whose enhanced creativity genes made her the perfect icy planner. But those same genes sparked a need for order and balance at odds with the goals of her masters.

Violet: a powerful empath whose alliance with the Vensoog Sand Dragon Jelli gave her the courage to defy her masters.

Rupert and Roderick: the intuitive chemist and the genius code cracker who turned out to be a lot tougher than their masters anticipated.

Only by working together can this diverse group stop the ruthless Thieves Guild from enslaving their planet. 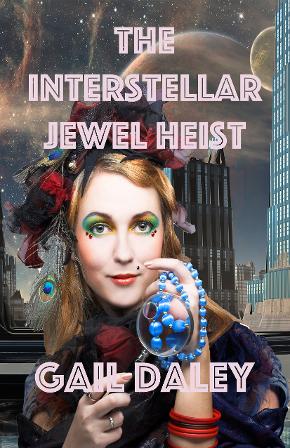 When she finds the body of a retired shopkeeper on the beach, a series of mysterious events draws Lady Jayla into a web of passion, terror and murder. She finally realizes that if she wants to stay alive, she must figure out who the killer is before she becomes the next target.

While dealing with this crises, she faces a slew of other problems. She needs to control her dysfunctional house-bot who thinks he's a sex-bot, and cope with Jake, her nosy boyfriend and her overprotective family. She needs to stop the interplanetary jewel thieves who keep breaking into her shop looking for their missing loot. To make matters worse, the local and interplanetary detectives investigating the theft and murder think she either stole the jewels or she makes excellent bait for the real thieves. Take your pick. 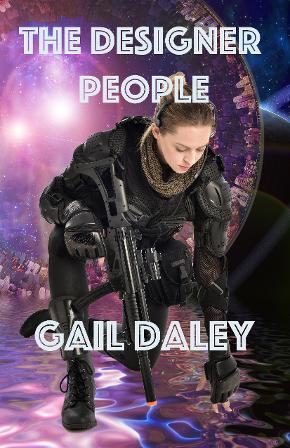 Lucinda was a "designer child". Given genius level intelligence in an embryonic Thieves Guild lab, she learned survival in a harsh world. At twelve, she was rescued and adopted into a loving family. As an adult Lucinda chose to fight her former masters by joining the police force. She works hard to earn her place among Vensoog's law enforcement community.

On her first assignment, compassion impeled her to protect an alien mother and daughter fleeing off-planet bounty hunters. To ensure their safety, she must defeat a deadly Soturi warrior in hand-to-hand combat. Then she rescues a 'designer child' who is a younger double for herself from a sex trafficking ring. To solve this case and rescue the other children trapped by those same criminals, she must capture a vicious Thieves Guild assassin. But even with the help of the best private eye on Vensoog, these are tough cases for a rookie cop. 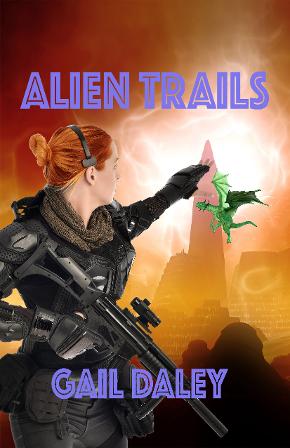 Juliette receives an assignment from the Parliamentary Council that both excites and intrigues her. She and her Dactyl Saura join an expedition team searching for the Lost City of the Elder races.

Accompanied by a diverse group of explorers Juliette discovers there are many dangers on the unknown continent of Kitzingen. When the exploration team encounters refuges from a crashed Life Boat, she spots a Thieves Guild tattoo on one of them and is immediately suspicious.

But the dangers on the expedition are nothing compared to what awaits Juliette when she returns home. Her old enemy, the brutal and callous Van Doyle, intends to kidnap her loved ones.

He has placed a bounty on the heads of Juliette's younger siblings, and it is one his men intend to collect even if they kill to do it. Does Juliette have the courage and skill to foil his plans and save them? Or will they disappear, never to be seen again?

The Magi of Rulari chronicles the on-going saga of two very different peoples learning to live together on a very alien world. A world where magic works and men live by the sword.

On a planet called earth in the Milky Way Galaxy, a way to open a Portal from world to world was discovered in the late 22nd Century. A similiar discovery happend on the world of the Sekhmet; A race of beings descended from felines as men were descended from primates. Were the new worlds found through the Portals simply other planets in the known galaxy or did they lead to other dimensions with other physical laws? Or perhaps—both?

On Rulari, time marched differently and although the laws of science still worked, more powerful forces governed Rulari: the force of Magic. Cut off from their home worlds, to survive both peoples needed to learn to control this new element.

When the Portal technology leaked to the general public, unregulated gates to all sorts of new worlds popped up like fleas on a dog in summer. Going through an unregulated a gate was a gamble: Immigrants who came through these illegal gates had only the supplies and technology they could carry to defend themselves against the alien plants and bizarre animals they found. Some survived. Some didn't. Despite the danger they came because of man's lust to explore and because they wanted freedom and adventure. With intelligence, courage, and sheer stubbornness, they built new societies on their new homes. St. Antoni is only one of those new colonies.

Welcome to the far future. The Confederated Planets has just barely survived an interstellar conflict with the Karamine Coalition. Many planets have been left barren, burnt off by the enemy. Others were decimated by a bio-virus.  The Space Colony Journals are stories about  the courageous women and dangerous men who dared to carve a home on another world.